Leo Peschta, * 1978 Vienna, Austria. After studies of photography and graphic design, Leo Peschta graduated in digital media arts from the Academy of Applied Arts Vienna in 2007. He works mainly in the file of robotics. He lives and works in vienna. 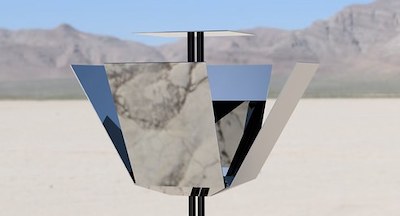 A sculpture using the principles of thermodynamics to constantly change its shape and therefore reflect different areas of its surrounding generating a flickering distortion in the landscape. In its initial state its in its most outspread form and collects the power of the sun. The more energy it harvests the more it closes changing the angle of its mirrors. When it reaches its minimum expansion state it ventilates its power collector and folds back to its initial state to start collecting energy again.